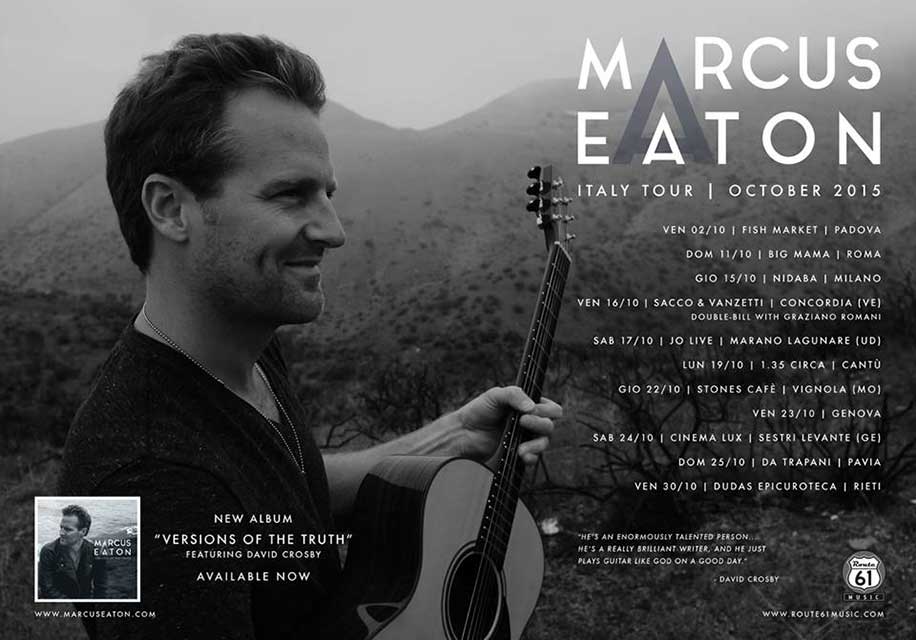 “One of the most talented musicians and between the best young American acoustic guitarist. Marcus plays guitar like God on a good day” –  This is how DAVID CROSBY described the acclaimed musician Marcus Eaton.

Route 61 Music published a wordwide preview, in advance with the American release expected for the next year, off the new album “Versions of the Truth” by Marcus Eaton. Exhiting and sharp lyrics, complex melodies but easy to catch, Eaton refines his virtuoso technic by guitar very similar as high level artist such as Pat Metheny, Michael Hedges and Tommy Emmanuel…

An extraordinary acoustic guitarist, but also a great songwriter, he has previously collaborated with David Crosby and opened for artists such as Bob Dylan and Dave Matthews. Additionally, Marcus has recently been working on the David Crosby documentary, ‘Remember My Name’, the score of which was released this yea through recording studios and during the long American tour together. Despite Marcus is a solo performer, his technic, the way he plays pedals and loops with his voice, all at once gets engaging shows, thanks also to an eclectic set list for his performance, in addition of covers by Michael Jackson, Led Zeppelin,  Beatles, Paul Simon, AC-DC all arranged with a very interesting version.

MARCUS EATON is now getting an international relevance for his music which redefined nowdays the acoustic rock genre.